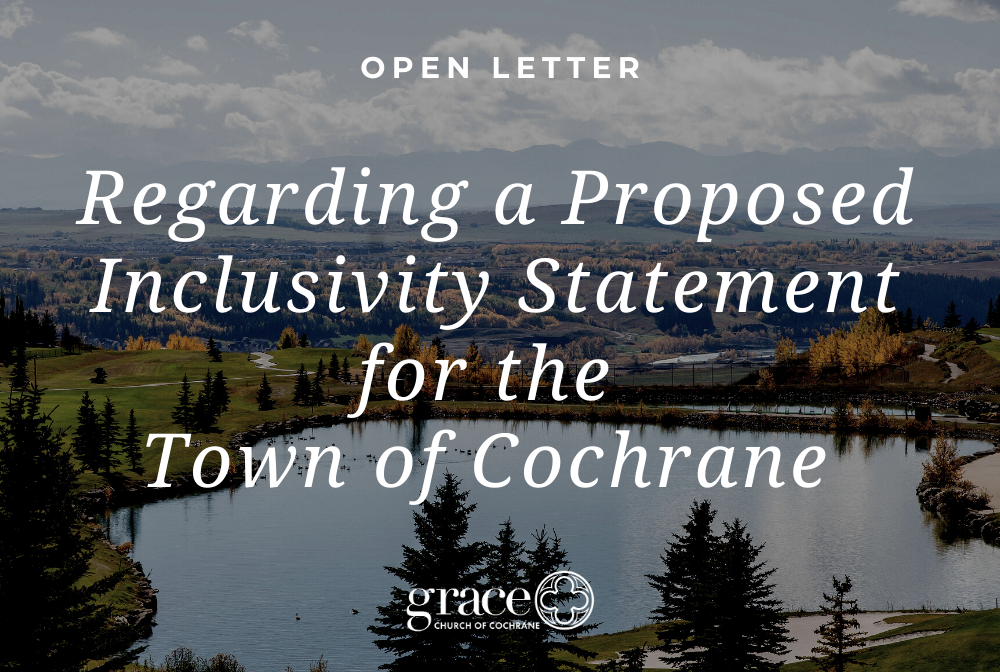 Below is the text of a letter sent by Pastor Jeff to Cochrane Town Council on September 28. Some hyperlinks have been added here that were not included in the original email to the Council.

I write this in response to a newspaper article last week describing the possibility of a new inclusivity statement for the Town of Cochrane.

I am encouraged by, and applaud the sentiment behind, the desire of the Council to promote an atmosphere of inclusivity in our town. I am a Christian; I wholeheartedly believe that every single human being is created in the image and likeness of God, and so each person is therefore infinitely valuable and worthy of respect.

I also serve as a Christian pastor, and so my mission is to proclaim, indiscriminately, to any and all who will hear, a message of true reconciliation and absolute and finished forgiveness that is, again, for any and for all who will turn away from their sin and trust in Jesus Christ—no matter who they are or what they have done.

And the vision toward which I labor is, I firmly believe, the original (and the final!) picture of true, lasting diversity: “a great multitude that no one could number, from every nation, from all tribes and peoples and languages” (Revelation 7:9) standing as one, in all their glorious diversity, reconciled to God and to one another for all eternity.

And as a servant of a God who is in some ineffable way simultaneously One and Three, I believe that in the world He has created, unity in diversity is actually achievable without pursuing one at the expense of the other.

I very much want a community where differences are not only tolerated, but where we extend grace and love especially to those we think are wrong. That’s because, speaking personally as a sinner who is very much in need of Christ’s forgiveness myself, I know that I must therefore extend, toward faults I believe I might see in others, the same tolerance and understanding that I would want them to extend to faults they believe they see in me.

I am well aware of the threat of intolerance, and that Christians have been guilty in the past of it as well. As a Protestant Christian and as a Baptist, I represent a faith tradition that has often in its history faced violent persecution both from other Christians and from secular authorities. Indeed, it’s an incontrovertible fact that Christians have, over two thousand years of our faith, faced persecution for their beliefs and that there are places in the world right now where that is still the case.

Therefore, I, and the evangelical Christian community in Cochrane, have a vested interest in seeing our Town be a place where differences between people in our community—whether they are visible differences like color, dress, or language, or less visible differences of belief and conviction—are not merely grudgingly tolerated but are given space in the public square to be openly shared, peacefully discussed, and even vigorously debated.

Accordingly, I have two concerns that I strongly believe Council must address as part of its consideration of any such statement:

First, in view of terms such as “inclusivity” and “diversity,” does Town Council believe that ideological diversity, that is, inclusivity towards people of different convictions and beliefs, is to be embraced in such a statement? The history of such “diversity” efforts on, say, academic campuses across North America has been disappointing in this regard. Typically such efforts actually aim to promote a surface-level diversity of race, language, and visible cultural accoutrements such as dress and cuisine while assuming—and eventually enforcing—a dangerous uniformity of belief and opinion. There are numerous cases of those who hold, say, conservative political opinions, or so-called “traditional” views on social issues, who wind up being “othered” or “canceled” as part of such a process. Will Town Council commit to embracing and promoting an inclusivity of ideology, one that celebrates public expression of belief by both individuals and communities, as part of any such effort?

Second, what worldview or philosophy will ultimately be reflected in this effort? I hope Town Council recognizes that its laudable goal, having a community where diversity and inclusivity can flourish, is one which depends absolutely and finally on having a conceptual foundation that permits such diversity in the first place. The reason Canadian society has, up till now, been a place where the rule of law and tolerance for diversity has flourished is ultimately because of the Judeo-Christian worldview on which it was built. This worldview recognizes (even if some of its adherents in the past have from time to time failed to recognize) that it’s futile to compel belief or change minds by force, and so makes space for a public square where differences can be aired out peacefully. In a Judeo-Christian worldview, all of this is only possible because of the confidence that God will judge the living and the dead, which means it’s okay for people to decide to “let that person who disagrees with me be wrong” knowing it will all be okay in the end.

My concern is that this inclusivity statement project, though well-intended, might wind up hijacked by a more intolerant standpoint: one desperate to impose some utopian vision of “justice” here and now by silencing certain groups or perspectives that dare to dissent, one informed by so-called “critical theories” very popular in the academy at present. Such an ideology can and should be part of vigorous discussion in a diverse public square, to be sure, but if it is entrusted with guardianship of that public square by means of tools like this statement, then I am forced to warn you that this entire effort is doomed to fail and will result in a more polarized and divided community.

So, please, be careful in how this proposed statement is written. My hope is that if Council is serious about proceeding with such a statement, it will choose to engage the whole community in this effort, perhaps by having a group of local community stakeholders—a true cross-section of our diverse community—assist Council by drafting such a statement, rather than leaving it behind closed doors with Town administration or, far worse, subcontracting it to an external advocacy outfit, only to be presented to the Town as a fait accompli.

Preparing for a Baptism Interview

What Happens at a Baptism?

Baptism Means I'm Being Sanctified by the Spirit

What Does Baptism Mean? I Have Been Forgiven By The Father

What Does Baptism Mean? I Have Been Joined To Jesus

In Whose Name Do We Baptize?

Who Is To Be Baptized?

A Practical Theology of Time

The Incarnation and the 25th

The True End of Christmas

No in-person service this Sunday, May 2 - join us by Zoom!

Day of Prayer & Fasting, Saturday May 9

Much To Be Thankful For!

Catechism & Bible Memory in the Life of the Church

An End--And A Beginning

Keeping the Faith in an Election Season

The Harmony of Plurality in Unity

How To Hear Sermons

Not Just Modes or Manifestations

Work As It Was Meant To Be