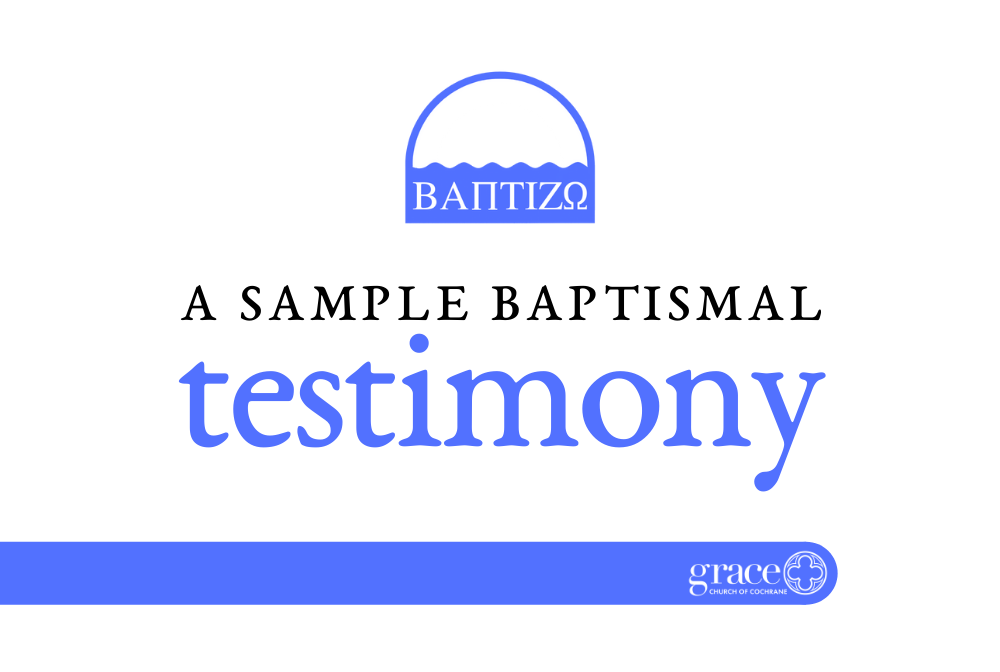 ...in your hearts honor Christ the Lord as holy, always being prepared to make a defense to anyone who asks you for a reason for the hope that is in you...(1 Peter 3:15)

(As a "sample" baptismal testimony, what follows is what I might write if I were to pursue baptism today.)

Growing up in a Reformed Christian family, I always presumed I was a Christian. I attended Christian schools for my entire elementary and secondary education and attended church with my family every week. I “asked Jesus into my heart” when I was around eight years old, but I don’t think I fully understood what it meant to be a Christian back then. My faith was something I had been basically born into; it was part of my family upbringing and identity.

My parents divorced when I was 15. That was a major shock that shattered much of the security in my life. In those dark days, the church was there for me and I clung desperately to it. I regularly attended youth group, and it was an escape for me. I felt more "at home" in the halls of the church building than I did at home. I considered myself a Christian and loved singing and worship. But my faith at this point was still more of an emotional attachment and expression than a deep, all-encompassing conviction.

I joined the Army at 17, and my true state of heart was revealed. Before, I had spent my entire life in a “Christian bubble,” not seriously exposed to the world. Once out of that protective environment, I quickly departed a Christian lifestyle. My military career became my identity and my idol. My language turned foul and I rarely darkened the door of a church. I still called myself a Christian and my buddies knew that was what I claimed to be, but there was no way to tell my life apart from theirs.

That all changed in 2003, when I sustained a career-ending injury. God smashed the idol, and I was devastated. I still at this time was calling myself a Christian. But I was questioning foundational doctrines like the Trinity and the exclusivity of salvation in Christ even before the injury. By God’s grace, I was still occasionally attending a Pentecostal church in Fredericton because I liked the music and there were people my age there. But I found myself increasingly uncomfortable in the services—especially baptismal services, which I found myself actively avoiding. Why the baptism services? Because I knew that, while I had been sprinkled as a baby, I had never publicly confessed my faith in baptism as an adult, and I knew that the biblical pattern was believers’ baptism. And so like Jonah I ran from what I knew I ought to do.

Eventually, though, I realized I was being convicted of sin. I was driving back to the base from church and I realized that I was a deep hypocrite. I realized I had no business calling myself a Christian if I didn’t take the Bible at face value—even on uncomfortable or unpopular teachings—or if I didn’t strive to honor Jesus with my lifestyle. I realized I had two options: either stop the act and admit I was an unbeliever, or truly devote myself to God. I got home resolved to be “all in,” and decided to read through the Bible cover to cover for the first time. And I did, persevering to the end. Along the way through that reading, which took a couple of months, I was changed. Though I can’t pinpoint the day or time, God “created in me a new heart” (Psalm 51:10), “drew me” to himself (John 6:44), and I believed.

Since that time my life has been profoundly different. My desires and values have changed. All of a sudden, I lost the desire to use foul language, something I can only describe as miraculous—since I had previously tried to stop swearing more than once by my own willpower and strength. I rediscovered my passionate love for God’s people and for the local church that I had had in my Youth group days, and threw myself into serving in any way I could. I found I could not get enough of learning about the Bible and God’s truth. Along with another Christian soldier I started an evangelistic Bible study on the base, and I also became a small-group leader in the college and career fellowship of my church; in these leading and teaching roles, I discovered that I not only loved reading and learning, but sharing that Word with others. I can only thank God that, by smashing my idols and breaking my body, he gave me “a living hope through the resurrection of Jesus Christ from the dead...an inheritance that is imperishable, undefiled, and unfading, kept in heaven” (1 Peter 1:3-4).

Why be baptized as a believer, especially since I had been sprinkled as a baby? Even prior to my crisis and conversion, I had realized that the Bible didn’t speak about infant baptism at all. I had already learned that baptism is an outward, public “appeal to God for a good conscience,” an act of faith (1 Peter 3:21), though for years I resisted the call that truth made on my life. But during that first cover-to-cover reading through the Bible, when I came to the Gospel picture of Jesus’ baptism (Matthew 3:13- 17), I realized I had no excuses left. As his disciple I needed to follow wherever he led—including into the waters of baptism. That is why I asked to be baptized as a believer.

Preparing for a Baptism Interview

What Happens at a Baptism?

Baptism Means I'm Being Sanctified by the Spirit

What Does Baptism Mean? I Have Been Forgiven By The Father

What Does Baptism Mean? I Have Been Joined To Jesus

In Whose Name Do We Baptize?

Who Is To Be Baptized?

A Practical Theology of Time

The Incarnation and the 25th

The True End of Christmas

No in-person service this Sunday, May 2 - join us by Zoom!

Day of Prayer & Fasting, Saturday May 9

Much To Be Thankful For!

Catechism & Bible Memory in the Life of the Church

An End--And A Beginning

Keeping the Faith in an Election Season

The Harmony of Plurality in Unity

How To Hear Sermons

Not Just Modes or Manifestations

Work As It Was Meant To Be